“I hope you step on a Lego®” has become one of the most popular curses on the internet with a large number of “memes” invoking the phrase (1) on the internet.

Stepping on a Lego® block while barefoot is often described as being very painful (2), which is a good way to describe what happens when you overstep the rules in internet marketing. 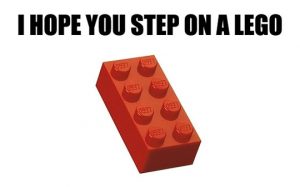 Different social media outlets have varying criteria of what they do and don’t allow, and other means of advertising have their own sets of guidelines. Google’s AdWords takes following their guidelines and best practices seriously, and incorporates how well a company does so as a part of the algorithm which determines how high their ads appear on searches for which they are relevant.

The amount which an advertiser bids for ad placement does not outweigh their boundaries (3).

While the penalties can vary, you can usually rectify the situation and minimize the damage with simple steps:

Continue to: When do you add new projects to make a bigger and more complete project?

Lego® and Terminus Web Group are not affiliated with each other. Examples using Lego® blocks are for illustration purposes only.

Getting the Word Out

Statistics on this website have been cited from the following sources:

Back to Top of Page